The Polish QWERTY variant named "lefty", introduced below, moves all the Polish letters to keys that are accessed by the left hand. The right hand's sole responsibility is simply holding the AltGr modifier key.

This eliminates the three awkward typing positions for the letters: Ł, Ó and Ń.

Download the layout definition for Linux/X11 from here. (MIT LICENSE)

Here is a standard PC ISO QWERTY keyboard. This is the kind of (physical) keyboard we use in Poland. Some computers come with an ANSI keyboard (flat, wide Enter key), and other come with an ISO keyboard (tall Enter key, pictured). To Polish typists, however, the ISO/ANSI distinction doesn't make that much of a difference, because neither of these layouts have decidated keys for our special letters.

We must fit the following 9 letters (in upper- and lowercase) in our keyboard layout, on top of all the standard Latin letters:

How will we do this? We'll need to use special key combinations.

They way most systems (Windows, Linux) accomplish the task of adding Polish letters to an ISO keyboard is by using the right 'Alt' key as 'AltGr' — a modifier key that upgrades regular letters on the keyboard to weird glyphs. (For example, holding AltGr+2 emits the ² character, AltGr+Shift+- gives me the emdash:—.)

The thing to note is that there is only one AltGr key on the keyboard! This is the right alt key, because the left one is still necessary to function as the regular alt. Case in point: alt+tab window switching does not work with the AltGr key.

To type Polish letters, we hold down the AltGr key and press the corresponding key to type a lowercase letter, and AltGr+Shift+key to get the uppercase.

Now, most of these keys are in nice positions at the left edge of the keyboard, so that one can hold the AltGr key with the right hand, and type the letter key with the left. There are, however, three very uncomfortable typing positions:

The letter ł, once pronounced as dark l ɫ, now pronounced roughly like the English w, is the most common of the Polish special letters, and comprises ~1.80% of Polish texts. That's a lot!

Look how awkward it is to type:

This is manageable if your right Alt Key is right underneath the , key, where it can be held down with the right thumb. Like on this Thinkpad keyboard: 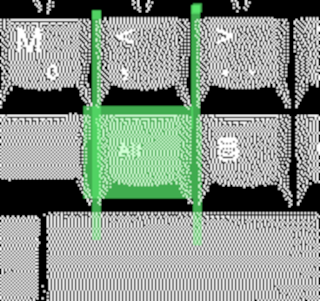 It's much worse if your AltGr key is way out to the right, like on this old mechanical keyboard: 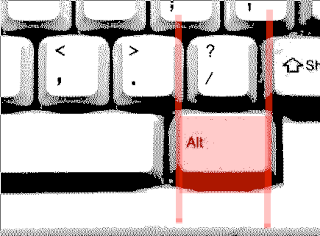 This letter is pronounced exactly like u, but is used in different grammatical contexts. That's not important, but what's important is that it comprises roughly 0.9% of all Polish texts, so you need to type it quite often.

The letter Ń is pronounced rougly like the Spanish Ñ. Comprising only 0.2% of Polish texts, it's not all that frequent, but still a pain to type.

The remaining letters of the Polish alphabet are placed conveniently under the left typing hand. Interestingly, the letter Ź is placed under the X key, because Z is already occupied by the letter Ż.

Here they are, all in one happy bunch:

You might have noticed in the image above, that the Q, W, and D keys are not used for typing Polish letters. Let's take advantage and complete the 3x3 square, like so:

Q is an Upside-down Ó

This one is easy. Q looks like an upside-down Ó.

W is English for Ł

This one is phonetically very natural. Polish speakers are used to W being pronounced like Ł in words of English provenance, such as Whiskey or Weekend, so let's make it official!

D is Ń. Just Because

The odd one out is the letter ń. I don't have a good justification for this, apart from wanting to fit all the Polish letters in the leftmost 3x3 grid on the keyboard.

And so we arrive at the following layout, which removes the awkwardness associated with having to use the right hand for modifier key combinations.

A Call for Ports

If you like this layout and happen to port it to Windows or Mac OS, please let me know and I will add it to this page.